US debt coughs and Wall Street shudders! More risk events will sweep the bond market in the second week of the new year

Dof Finance > Finance > US debt coughs and Wall Street shudders! More risk events will sweep the bond market in the second week of the new year

“US debt coughs and Wall Street shakes three times”. At the beginning of the new year, the sharp rise in US bond yields had a significant impact on a variety of assets, including technology stocks, cryptocurrencies and precious metals. Market participants seemed to return to the panic years when the bond market sold off in the first quarter of last year. Looking forward to the coming week, with the advent of many risk events, the trend of the bond market is likely to continue to affect the market performance of the above assets.

Market data show that last week, the index 10-year US bond yield rose by about 25 basis points, the largest weekly increase since September 2019. Among them, the increase in the first four trading days reached more than 20 basis points, which was not seen at the beginning of the new year in recent two decades, and directly affected the sharp decline of a variety of assets, from high valued technology stocks to cryptocurrencies.

In the intraday trading on Friday, the yield of 10-year US bonds once hit 1.801%, the highest since January 2020. This indicates that it has now surpassed the peak of 1.776% in the bond market selling tide last year. 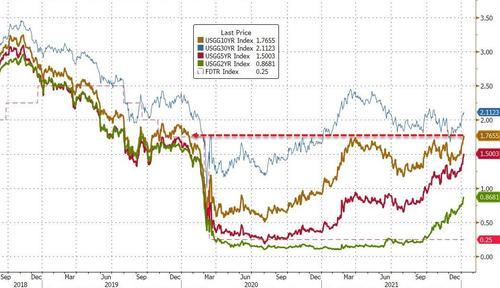 In terms of other cycle yields, the yields of two-year and five-year US bonds reflecting the prospect of market interest rates hit the highest levels since March and January 2020 respectively last week. Us 30-year Treasury yields hit an 11 week high.

The rise of US bond yields in the first week of the new year is largely due to the minutes of the December meeting of the Federal Reserve released last Wednesday. The minutes show that the Fed may raise interest rates earlier than expected, and may reduce its bond holdings earlier than many initially expected. At present, the trend of federal funds rate futures suggests that the Federal Reserve has about 90% possibility of raising interest rates by 25 basis points in March and raising interest rates more than three times before the end of the year.

Traders have been preparing for the prospect that the Fed will begin to withdraw liquidity. In the past two years, the amount of liquidity in these days has led to a sharp rise in the prices of various assets, including real estate, online bonus stocks and speculative technology stocks. But even so, some people were surprised by the speed at which the bond market adjusted its pricing last week.

Like many Wall Street traders, Priya Misra, head of interest rates at Dow Jones securities, thought this year would usher in a new year in calm.

“I can’t sleep a little. I didn’t think that’s the way it will be at the beginning of the year. There’s still concern about COVID-19. But we have to consider not the interest rate drop and the Fed’s loosing, but how fast the Federal Reserve will withdraw and how much interest rates will rise.” this may be confused and disoriented, “Misra said.

Before the release of the minutes of the Fed meeting on Wednesday, Misra and her colleagues also advised customers to buy two-year Treasury bonds. They expect that the rapid aggravation of the Omicron epidemic will reduce the possibility of the Fed raising interest rates as early as March. However, the minutes showed that the Fed may raise interest rates earlier and faster than originally expected, and the two-year Treasury bond immediately fell sharply.

In fact, the increase of about 25 basis points in the benchmark US bond yield this week has far exceeded the average expectation of economists and strategists in the next three months according to Bloomberg survey – they originally expected that the 10-year US bond yield would not rise to 1.71% until the end of March, while the general expectation for the end of 2022 was 2.04%.

Gargi Chaudhuri, head of iShares investment strategy in BlackRock America, said that the rate of increase in yields was obviously somewhat surprising.

It is worth mentioning that at the beginning of the new year, the US bond yield continued to soar, which is easy to compare with the sharp rise a year ago – in the first three months of 2021, the US bond yield also experienced a similar sharp rise. At that time, the prevalence of re inflation trading made people sell off long-term US bonds one after another. It was not until April of that year that the interest rate shock subsided and gave way to a long range trading. 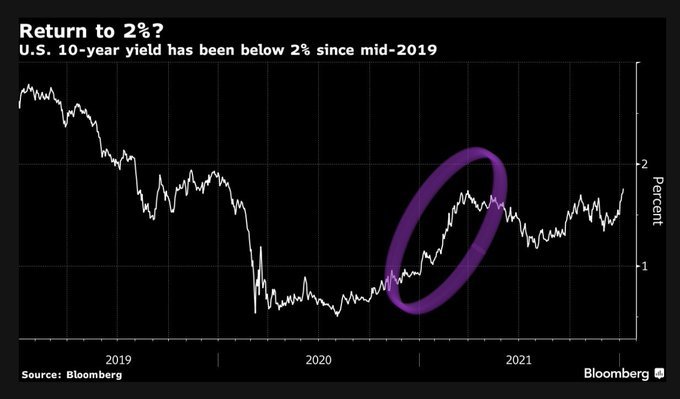 At present, the confidence of US debt bears is obviously more sufficient than at thattime.Kevin Flanagan, director of fixed income strategy at WisdomTree, said, “you can really feel that we have seen this situation before, but the biggest difference from 12 months ago is that this time the Fed is indeed driving the market by suggesting that it wants to tighten policy as soon as possible.”

Rob Waldner, chief fixed income strategist of Jingshun, said, “the Fed’s policy focus has shifted from achieving full employment to addressing inflation. They will take action this year and will be more aggressive. We expect the yield to rise, and the yield of 10-year US bonds may rise to slightly higher than 2% in the first quarter.”

Second week of the new year: More risk events are about to hit the bond market

Looking forward to the second week of the new year, the performance of the U.S. bond market will obviously still become one of the most important triggers for the stock market, foreign exchange market and even the commodity market, especially in the context of the upcoming multiple macro-fundamental risk events this week.

In terms of economic data, the U.S. Department of labor will also release the most watched CPI data for December on Wednesday. At present, economists generally expect that the CPI increase in December may further reach 7.1%, which will be the first time that the U.S. price increase has entered the “7 era” in more than 40 years.

Flanagan of WisdomTree said that if the overall inflation data in December is strong, it will help to continue the current trend of higher US bond yields, because the Fed will face pressure and must take action in March and explain its ideas at the next meeting at the end of January.

The yield of 10-year U.S. Treasury bonds once soared to break through the 1.80% mark on Friday. Although it has dropped to around 1.76% since then, it may easily return to this level in the next week.

“At and near these levels, the market will try to find some short-term support,” said Greg faranello, head of U.S. interest rates at amerivet securities. He added that multiple auctions this week could help temporarily limit the rise in yields.

Gargi Chaudhuri, head of iShares investment strategy at BlackRock Inc., said, “we don’t expect the yield to rise sharply. When the yield of 10-year US bonds approaches 2%, buyers will appear, resulting in more two-way fluctuations.”