Fed officials initially discussed how and when the central bank could reduce its $8.76 trillion in U.S. Treasury and mortgage-backed securities assets, minutes of the meeting showed. In its efforts to stabilize the economy over the past two years, the size of the Fed’s balance sheet has doubled.

Almost all officials agree that it may be appropriate to start the balance sheet reduction at some point after the first rate hike, and that the appropriate time to start the balance sheet reduction may be closer to after the start of the first rate hike than previously expected. Some (some) believe that the Fed should make a strong commitment to address rising inflationary pressures.

Fed Chairman Jerome Powell said last month that he and his colleagues had not made any decision on the balance sheet reduction and that discussions could continue at their Jan. 25-26 meeting. But he suggested the Fed was not prepared to follow the path it took from 2014 to 2019.

In the last balance sheet reduction process, the Fed kept its assets roughly unchanged for about two years after the first rate hike, and then gradually reduced its balance sheet in October 2017.

But Fed officials now believe that the current situation is significantly different from the last time the balance sheet was reduced.

The economic outlook in the U.S. is now stronger, with higher inflation and a tighter labor market. The Fed has a larger balance sheet, both in dollar terms and in terms of its ratio to GDP. At the same time, the Fed’s sustained bond-weighted average maturity is shorter. This means that the balance sheet can be reduced faster without a process cap by simply allowing bonds to mature.

The reduction process may continue until 2025

In addition to choosing when to start shrinking assets, Fed officials must also decide how to shrink assets.

In the last round of balance sheet reduction, the Federal Reserve, starting in October 2017, allowed some securities ($10 billion) to expire each quarter without renewing purchases, increasing by $10 billion each quarter until the end of 2018.

UBS predicts that the Fed’s balance sheet reduction action may be targeted for three years, starting at the beginning or middle of this year, and ending when the size of the balance sheet falls below US$3 trillion, and the overall size will account for about 2025 in the second half of the year’s GDP. 25%. 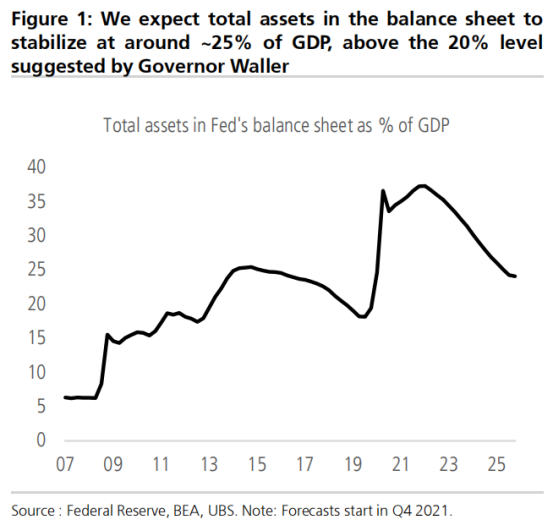 There are differences in the specific composition of assets

In theory, holding long-term U.S. Treasuries provides more stimulus than holding short-term securities. But the Fed’s portfolio now contains far more short-term Treasuries than it did in the past decade. If officials don’t limit the amount of passive balance sheet reductions, the Fed’s holdings will shrink relatively quickly, by about $3 trillion over two years.

At present, Fed officials are divided on how to structure the asset portfolio: some people believe that the short-term, medium-term and long-term bonds should be held in proportion to the outstanding bond market, which is relatively neutral to the market; others One faction favors a larger holding of short-term Treasuries and other bonds with shorter maturities, which would allow the Fed to quickly switch to longer-term Treasuries to boost stimulus in a downturn.

Notably, the Fed actually suspended passive balance sheet reductions in 2019 and began building assets (re-expansion) later that year amid concerns that too much bank reserves were being drawn from the financial system. It is worth noting that the reduction of the balance sheet in the future will be completed as expected.