After plummeting 3.3 trillion yuan, Munger ferociously hunted for the bottom! The first purchase has lost 45%, why choose Ali?

The more fearful others are, the more greedy the “stock god” seems?

In the face of Alibaba, which continues to plummet, 97-year-old Charlie Munger seems to be more and more determined to “buy the bottom” and increase his positions.

Recently, DailyJournalCorp., owned by Charlie Munger, the golden partner of “stock god” Buffett, disclosed the 13F document. As of the end of December 2021, DailyJournalCorp has accumulated 602,060 shares of Alibaba through American Depositary Receipts (ADRs). Calculated at the latest stock price, The market value held is about 76.23 million US dollars (about 487 million yuan).

This is the third time that Munger has bought Alibaba stock after the first and third quarters of last year, and the increase in this position is nearly doubled, which is very rare in his past investment career. However, since 2021, Alibaba’s life has not been easy. The stock price has suffered three consecutive rounds of sharp falls. The current stock price has dropped by 60% from the highest point, and the total market value has evaporated by more than 522.3 billion US dollars (about 3,333.9 billion yuan). Alibaba stock, which made Munger’s first position, has lost more than 45%.

Compared with Munger’s loss on Alibaba, Cathie Wood, known as Wall Street’s “Queen of Technology” and “Female Buffett”, may be even more lonely.

In 2022, the Ark Innovation ETF (ARKK) managed by Wood suffered the worst start, plummeting by more than 7% in a single day and by more than 11% in the first three trading days, making it the worst annual start in history. In 2021, ARKK’s maximum retracement is close to 45%, while the Nasdaq index has risen by more than 21% in the same period, completely lost in the bull market.

The positions of Buffett and Charlie Munger, known as the gods of value investing, have always been the focus of global markets.

According to the document data, as of the end of the fourth quarter, DailyJournal held a total of 5 stocks. The biggest change in the position was that the number of shares held in Alibaba increased to 602,060 shares, and the market value of the positions reached 71.519 million US dollars (about 456 million yuan). Positions have almost doubled from the end of September last year.

In addition, DailyJournal also holds Bank of America, Wells Fargo, U.S. Bancorp, and Posco, and the number of positions has not changed significantly. 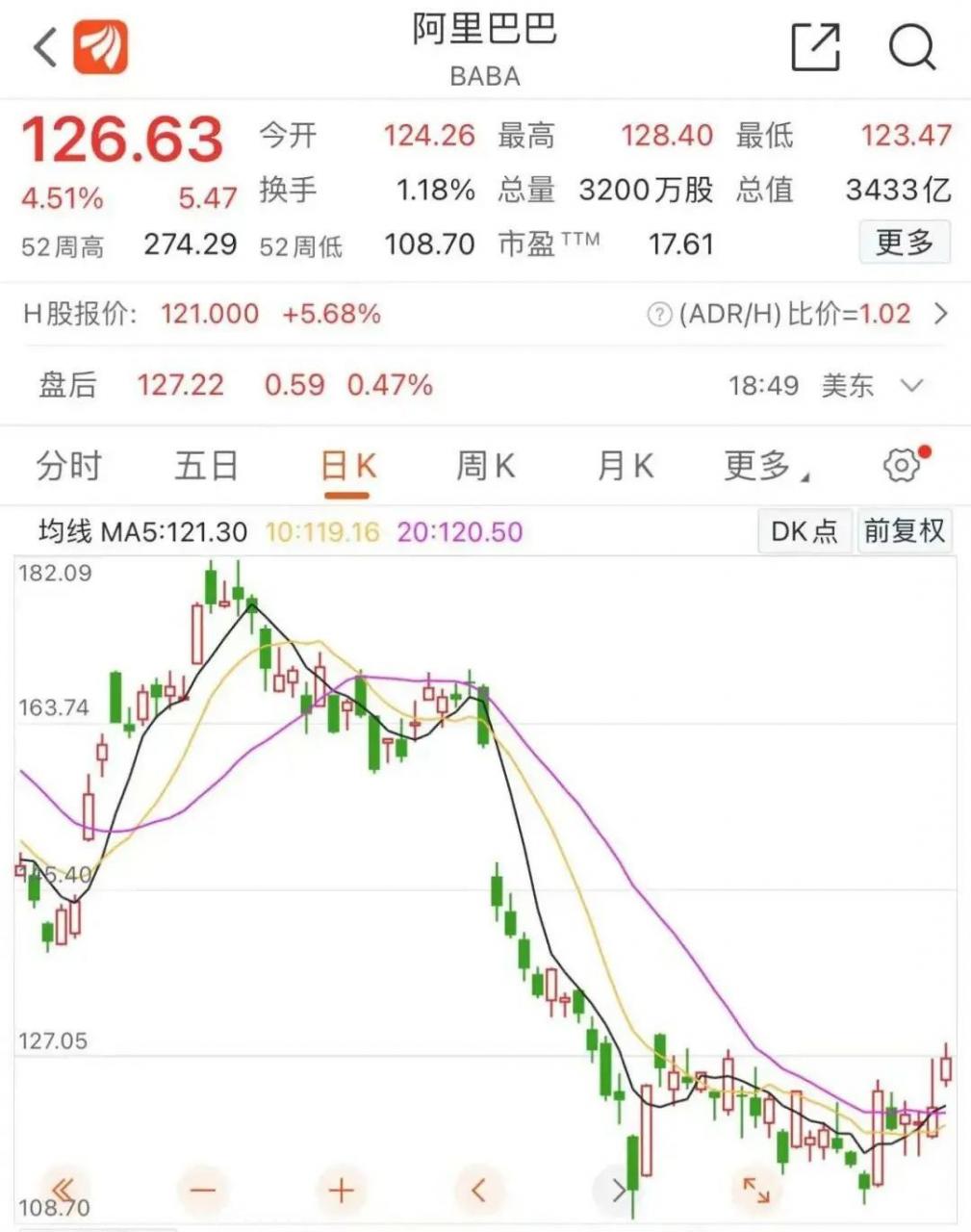 Reviewing the historical position data of DailyJournal, it can be found that under the helm of Charlie Munger, the company’s investment style is very cautious, almost all focusing on high-dividend stocks in traditional fields. Heavy positions “buying the bottom” and adding Alibaba against the trend surprised the market.

Looking back at the time when Charlie Munger opened and increased Alibaba’s positions, in the fourth quarter of 2020, Alibaba’s stock price suffered a continuous decline, with the largest drop in a single quarter reaching 33.8%, and the total market value evaporated by 166.5 billion US dollars.

Then, in the first quarter of 2021, the DailyJournal under Charlie Munger tried to buy 165,300 Alibaba shares. In the second quarter, Alibaba’s stock price went sideways, and Charlie Munger continued to hold the position. Quantities did not change much.

However, Alibaba’s stock price has not stopped falling. In the fourth quarter, it fell by nearly 20% again. After three rounds of sharp declines, Alibaba’s total market value has evaporated by 459.7 billion US dollars (about 2,452.1 billion yuan), making Charlie Munger’s holdings Alibaba stock is getting deeper and deeper. Based on the latest stock price, Munger’s first position has already lost more than 45% of his shares. Surprisingly, Munger chose to increase the position again in the fourth quarter, and the increase rate was close to 100%, which was very rare in his past investment career.

During the period, Alibaba continued to encounter “water retrogrades”. Since August 2020, Alibaba has been stranded by Ant’s IPO, one after another of anti-monopoly investigations and penalties, and has been snatched by Pinduoduo as China’s largest e-commerce platform. , Internet strong supervision, foreign investors sell off Chinese concept stocks…

After the slump, is Alibaba worth buying?

So, Charlie Munger, who is so cautious about technology stocks, why did he choose to increase his position in Alibaba against the trend after “buying the bottom”? Are you planning to hold the stock for a long time?

Combined with Charlie Munger’s investment style and his determination to buy dips and increase Alibaba’s positions twice, Charlie Munger is likely not to speculate on short-term price differences, but may be betting on Alibaba’s future long-term development.

After encountering a series of anti-monopoly regulations, Alibaba’s operating performance has indeed experienced certain fluctuations. According to the financial report, the revenue in the third quarter of 2021 was 200.69 billion yuan, a year-on-year increase of 29%, which was lower than the market expectation of 206.17 billion yuan; if the impact of the merger of Sun Art Retail was not considered, the single-quarter revenue was 180.438 billion yuan, a year-on-year increase of 16% . At the same time, Alibaba lowered its 2022 revenue guidance to 20%-23% after adjustment.

However, Ali’s core business business (Tmall, Taobao, Juhuasuan) still maintains a high growth rate. As of the third quarter of 2021, Ali’s e-commerce monthly active users (MAU) reached 946 million, an increase from the same period last year. The number of annual active buyers of Taobao special edition has reached 270 million, a year-on-year increase of 200%. Alibaba is accelerating its sinking, and the sinking market space is huge.

After a round of decline in the stock price, Alibaba’s valuation is already very cheap, and the latest price-earnings ratio (TTM) is only 17.5 times, which is rare in Alibaba’s history.

From a dynamic point of view, Charlie Munger’s buying and increasing positions may be buying high-quality companies at cheap prices, and waiting patiently for the industry to be overseen. Alibaba’s future is likely to remain one of the best e-commerce giants in China.

Munger once said in an interview, “China has a real economic growth rate for 30 years, which is unprecedented in any major country in the history of the world. I have invested in some American companies that do business in China, including Coca-Cola. Of course, I also have a very successful experience with Chinese top companies [in terms of perception], and that will likely continue as well.”

Previously, Munger had enjoyed the huge gains from investing in China. He earned more than $5 billion in floating profit for Berkshire through investing in BYD, and the profit margin was more than 20 times.

It is worth noting that Duan Yongping, known as “China’s Buffett”, has publicly stated that he will “buy more and more” Chinese Internet stocks, and has successively bought the bottom of Alibaba, Tencent and Pinduoduo, releasing a positive signal to the outside world.

Compared with Munger’s loss on Alibaba, the investment record of Cathie Wood, known as Wall Street’s “Queen of Technology” and “Female Buffett”, may be even more bleak.

After the start of 2022, the flagship fund Ark Innovation ETF (ARKK) managed by Wood directly suffered the worst start. On Wednesday, local time, the Federal Reserve released a clearer signal of raising interest rates and shrinking its balance sheet. U.S. technology stocks suffered a severe sell-off. Wood’s “disruptive innovation” concept stocks also fell. ARKK’s net worth plummeted by more than 7% in a single day, the most since its establishment. Dramatic capital shrinkage.

At present, ARKK has fallen by more than 11% in just three trading days in the new year, which is the worst start to the year in the history of the fund. 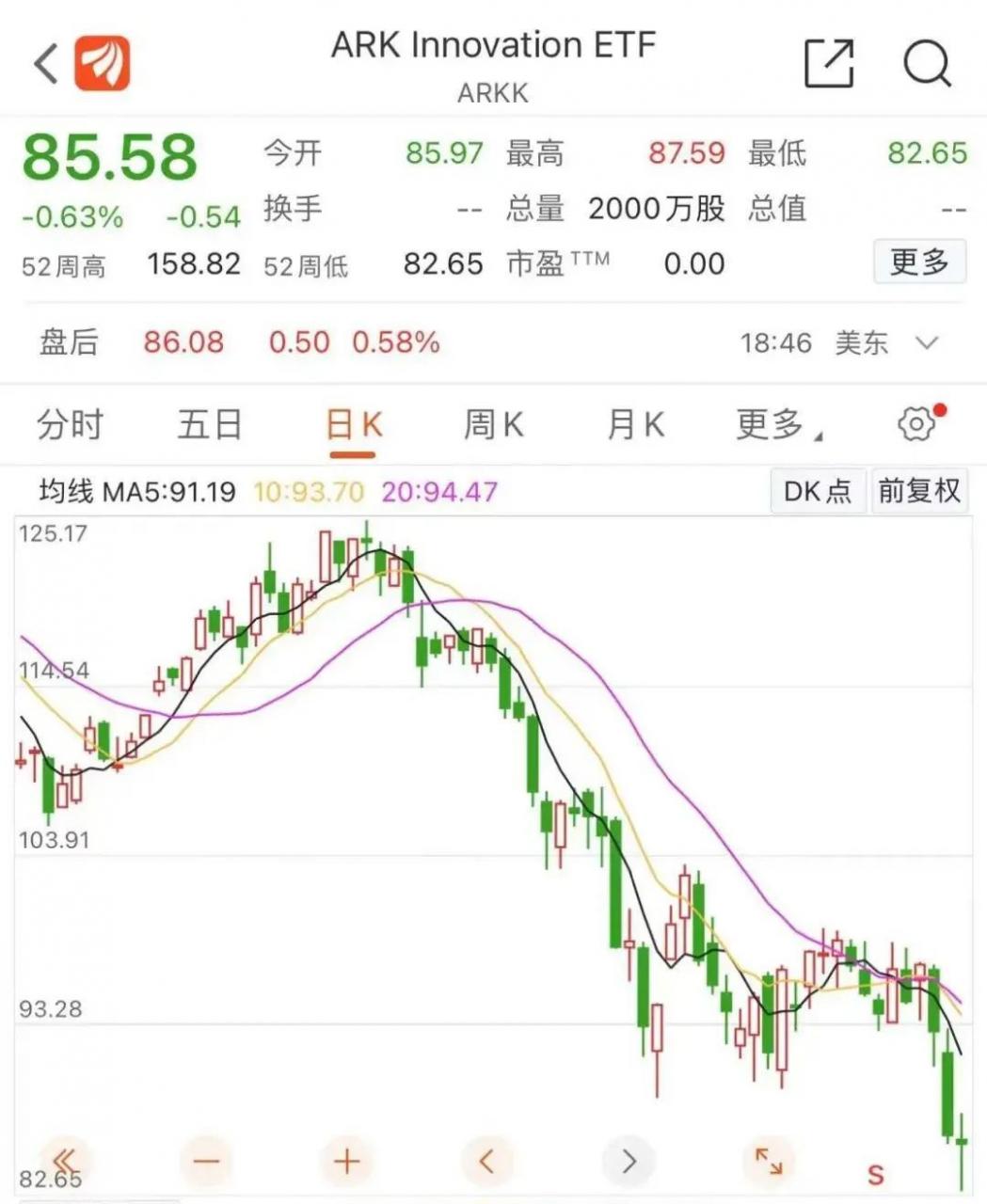 In 2021, the maximum retracement of ARKK’s net value is close to 45%, while the Nasdaq index has risen by more than 21% in the same period. In addition, the other 4 actively managed ETFs managed by Wood: Industrial Innovation Fund (ARKQ), Next Generation Internet Fund (ARKW), Gene Revolution Theme Fund (ARKG), FinTech Innovation Fund (ARKF) are also lackluster, 2021 The annual returns were 0.9%, -19%, -34%, and -17.8%, which significantly underperformed the gains of major U.S. stock indexes over the same period. It means that Wood is completely lost in the U.S. stock bull market.

Wood survived a dismal 2021, but 2022 may be even less optimistic. The Fed’s early start of raising interest rates will likely become the most important indicator of the global market in 2022.

As we all know, the impact of interest rate hikes on high-valued technology stocks is the most obvious. Once the interest rate hike is initiated, the market capital rate will begin to rise, and the market liquidity will decrease accordingly, so that some funds will choose to withdraw from the stock market, especially some stocks with higher valuations will be sold off by funds, mainly including technology stocks. Dividends have a certain negative impact on tech stocks.

And Ark Investment, managed by Wood, has been focusing on investing in disruptive innovative technology companies. Most of the companies have very high valuations, or even at a loss. Once the market risk appetite declines, high-valued technology stocks will face greater risks.” “kill valuation” risk.